Whittlesea Primary School is located in a picturesque township just south of the Great Dividing Range, 39 km north of Melbourne, and only eight minutes drive beyond the northern suburbs.

Our priority at Whittlesea is to meet and challenge the individual learning needs of our students and to enhance their learning opportunities and achievement.
Whittlesea Primary School’s underlying philosophy is to facilitate lifelong development and growth of children so that they can achieve their full potential as individuals and as members of a local and global communities.

Parents, students and staff are strongly encouraged to work together in partnership recognising our shared expectations of ‘Respect Your School’, ‘Do Your Best’ and ‘Help Others Succeed’. As a community of learners, it is our mission to be the best that we can be.

At Whittlesea Primary School the student is at the centre of everything we do.  Our vision is to be an inclusive community where learning is highly valued.  We strive to develop and support the emotional, social and physical wellbeing of the whole child.  We create a positive climate for learning that encourages all children to become collaborative and innovative members of local and global communities.

Hello, my name is Ty Hoggins and I am the Principal at Whittlesea Primary School. On behalf of our Assistant Principal, Rae Gittos and all the staff and we welcome you to explore this website. You will learn about the innovative programs and learning opportunities we provide at our wonderful school.

The students are at the centre of everything we do at Whittlesea Primary School, with a commitment to academic achievement, social and emotional development and the advancement of 21st century skills. At the forefront of our school’s direction is a passion to prepare our children for their future. Through personalised learning approaches that embrace the inquiry learning model, children at Whittlesea Primary School learn through doing. They also benefit from a positive, supportive culture highlighted by our commitment to ‘School-wide Positive Behaviour Supports’. At our school we are clear with our expectations, teach the behaviours we want to see and constantly reinforce these through recognition. Our students enjoy a strong sense of connection at our school through leadership programs, a rich house program and an underlying belief that strong relationships are vital.

Our teachers are dedicated, talented educators who strive to meet the individual learning needs of each and every child. With comprehensive specialist programs including Physical Education, Arts and Chinese (Mandarin) we offer a comprehensive range of experiences in accordance with the Victorian Curriculum.
A visit to our school will showcase the outstanding large spaces we enjoy. Our children collaborate in engaging, rich learning spaces, well-resourced with large screen displays, ‘soundfield’ audio systems and more. Recreation areas are expansive, allowing our children opportunities to be active without overcrowding. We take great pride in our schools presentation.

Whittlesea Primary School has a proud history, being a pillar of the Whittlesea community for over 100 years. Our commitment is to continue this proud history with strong community engagement and partnerships. Our children are taught the core expectations on a daily basis and we are insistent on these being evident in our actions each and every day.

When the Victorian Government passed the Education Bill in 1872, it acquired an existing Whittlesea School (No 658), established in 1855 by the Church of England. The third head teacher of this school, William Stubbs, oversaw the transition to the present location on September 1, 1878. Whittlesea State School (No 2090) was designed by Education Department architect Herbert Bastow, and built by local builder W. H. Lockwood. Thomas Barker [1881-1899] is on record as the school’s longest serving Head Teacher with enrolments in excess of 100. Another long serving head teacher, Thomas Jobling (1908-1924), led the school through the dark days of WWI. The school moved to the Whittlesea Memorial Hall in 1927 while building upgrades were carried out. In 1930, the school won ‘Best Kept School Garden’ under William Campbell (1928-1940).

During WWII, the children donated thousands of eggs to Melbourne hospitals. Enrolments dropped to 51 after the war but the closure of Eden Park and Glenvale schools helped bring them up again. Reginald Broben (1957-1965) initiated a building program to keep pace with numbers. In 1968 with enrolments at 204, the School Committee petitioned the Education Department for a new site. This was turned down. Instead, adjoining land was acquired and extensively cut and filled to turn the sloped terrain into the school oval of today. From 1974 to 1978, enrolments rose dramatically from 226 to 383. Temporary classrooms were installed and play space greatly reduced. In the centenary year of 1978, the whole town celebrated with a street parade to the school. Enrolments reached 399 in 1985 and more portables were added. The growing pains were eased when numbers dropped to 298 by 1989 as the local Catholic school established itself.

Yvonne Scott (1992-1999) oversaw the “Master Plan”. The purchase of the neighbouring Woods Paddock paved the way for a new library, staffroom, music room and gym complex, and the relocation of portables. The original building was given Heritage status in 1998 and underwent a major refurbishment. Enrolments hovered around 410 during David Dyer’s term (2000-2009). He oversaw planting of 50 fruit trees. Past students from that time remember the many songs they learned at assembly each week.

Bente Stock (2010-2016) became Principal as the school experienced another significant build. The forty year old office and classroom complex, was replaced by The Federal Government’s “Building the Education Revolution” building and named the Early Learning Centre. In 2014, the Woods Paddock area was converted into the present synthetic turf soccer field. By 2018, four new portables were installed. The 2020 enrolment is 430 and Ty Hoggins and Rae Gittos lead a staff of 43.

The one unchanging feature in the entire life of the school has been the oak tree which is believed to have been planted at a time when the Farmers Arms Hotel stood where the Heritage building now stands. 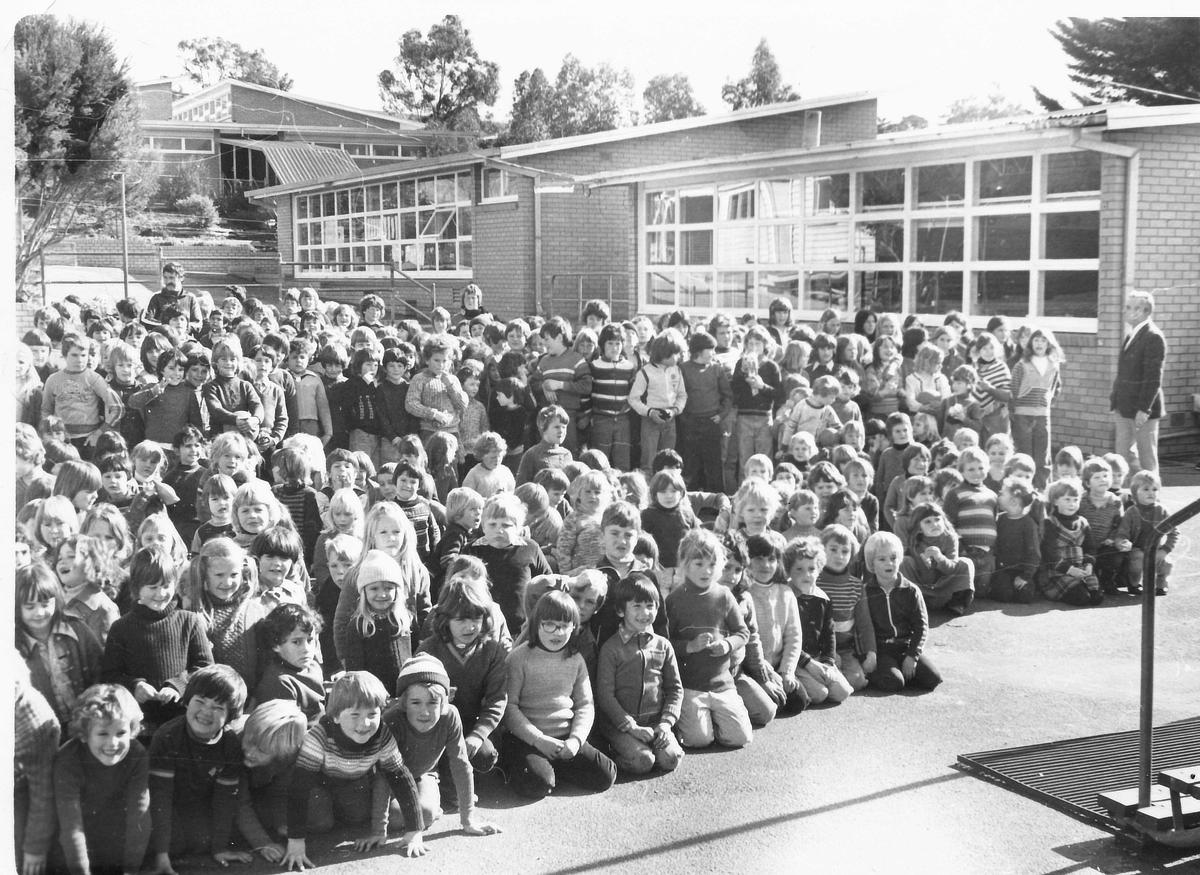